Yay! Your Cyber Monday gift will be free at checkout (Fountain of Glow $25 value) Your least favorite symptom in menopause? Lack of sleep. Because in this phase of life, it’s not just about falling asleep...it’s about staying there. That’s why we chose innovative, clinically proven ingredients—like MicroActive® Melatonin, with its longer sustained-release formula, and highly bioactive, naturally derived magnesium—to help you wake fully rested and feeling back to your unstoppable, up-and-at-‘em self.*

Adults, take 1 capsule with water before bedtime as a dietary supplement or as directed by a doctor.

Warning: As with any supplement, if you are taking medications, have a medical condition, or have difficulty swallowing, consult your doctor before use.

Do not drive or operate heavy machinery when using melatonin.

This product is not to be taken by pregnant or lactating women. Do not use in conjunction with alcoholic beverages.

Store at room temperature in a dry place.

A proprietary mix of polymer molecules shown to slow its release rate of melatonin—the hormone in your brain that regulates sleep cycles—to help keep you asleep longer. Unlike melatonin brands whose active ingredient is released over a short period or in which a significant portion isn’t released at all, MicroActive® Melatonin allows for absorption over a longer period. It’s a two-stage, seven-hour, 100% sustained release: in the first hour, 40% is rapidly released, while the remaining melatonin releases slowly over the next six hours. This melatonin is vegan.

This vital nutrient plays several roles, like activating the part of the nervous system that controls relaxation, stimulating GABA receptors, and regulating melatonin levels. Our highly bioactive magnesium is derived from a natural mineral source produced from seawater.

Short for gamma aminobutyric acid, this amino acid naturally found in your brain produces a calming effect and helps you with stress.

Commonly consumed as a soothing herbal tea before bed, this flowering plant contains powerful polyphenol compounds shown to calm nerves and reduce anxiety and has been frequently used to treat insomnia and other sleep problems.

AquaminTM is a registered trademark of Marigot Ltd. of Cork, Ireland.

MicroActive is a registered trademark of BioActives LLC.

*These statements have not been evaluated by the Food & Drug Administration. This product is not intended to diagnose, treat, cure, or prevent any disease.

“Interrupted sleep is my consistent battle in menopause. For me, our sustained-release melatonin was key. Now I’m sleeping all night (and not waking up groggy!)” 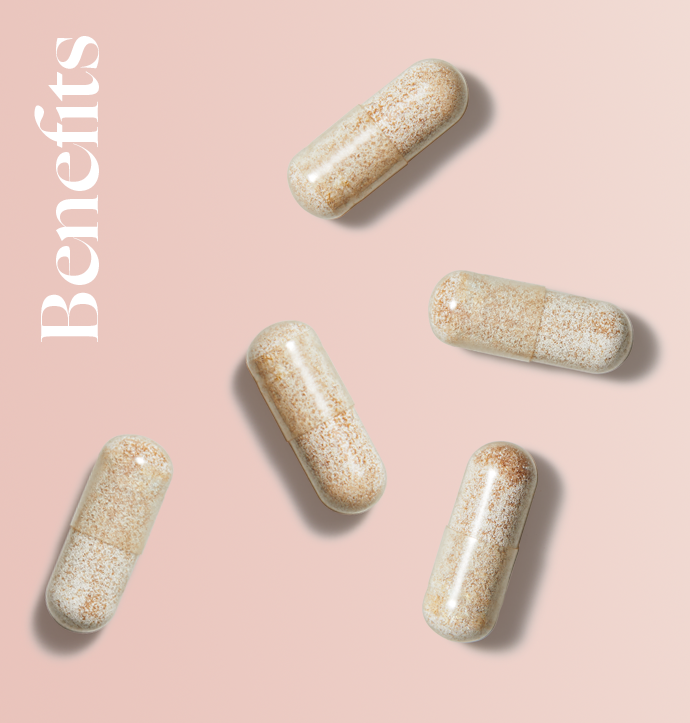 Allllll Through the Night

Formulating this supplement was a huge deal to us. We paid extra attention to ensuring it wasn’t just another solution for falling asleep…because from our experience in menopause, we needed help remaining asleep, too. We chose a unique melatonin to help with that exact issue—one shown to release 40% of its active ingredient in the first hour, and then release the rest slowly over the next six hours to keep you sleeping. And to help tired-but-busy brains feel more relaxed, we enlisted the help of naturally good ingredients like magnesium, GABA (for its stress-reducing superpower), and a calming nighttime classic: chamomile.

more products recommended just for you